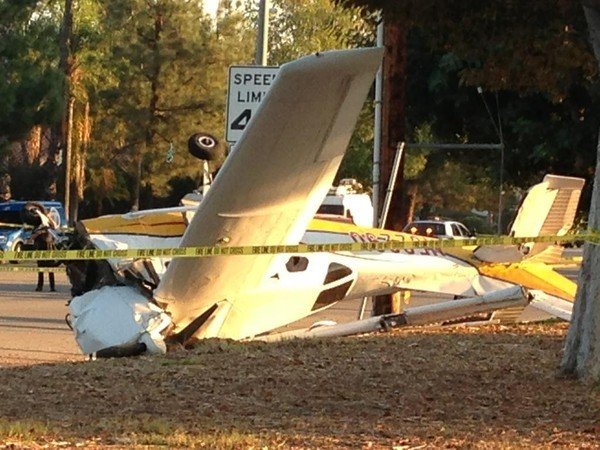 A small plane lost its power and crash-landed adjacent to a soccer field at Cal State Northridge Sunday, injuring two people, a city fire spokesman and an FAA official said.

The plane crash and small fire were reported at 3:09 p.m., said Brian Humphrey of the Los Angeles Fire Department.

The single-engine airplane’s pilot had radioed the Van Nuys Airport tower that he was having engine trouble, and tried to land on the soccer field. Humphrey said the plane went down the field, through a chain link fence and flipped.

“He just simply ran long on the athletics field,” Humphrey said. The pilot and passenger were able to open a door and were assisted by passersby (see KTLA video).

Twenty minutes after the crash, the man and woman were “sitting in the back of a city fire ambulance, with minor injuries,” Humphrey said. They were described in fair condition.

The field is west of Zelzah Avenue, and south of Plummer Avenue. No structures were involved in the crash.

The crash was about five miles northwest of the nearest airport, at Van Nuys.

The Cessna 206, described as a six-seat single engine high wing plane, departed from Novato and was headed for John Wayne Airport, Ian Gregor of the Federal Aviation Administration said. The aircraft lost engine power near Van Nuys Airport, he said.

There were no immediate reports of injuries to anyone on the ground, and there was no ground damage, Gregor said.

The FAA and NTSB will investigate.