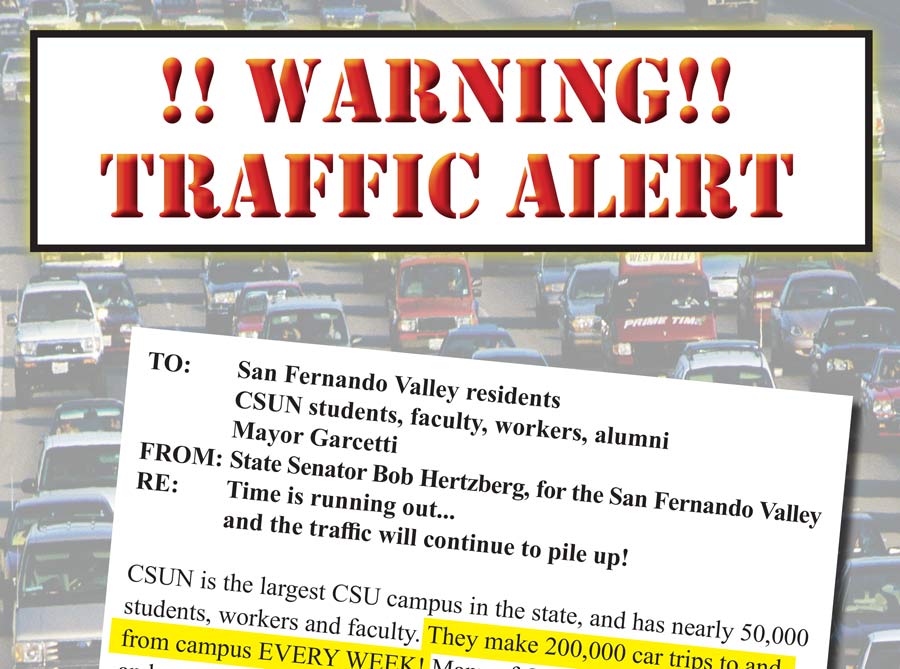 SACRAMENTO – Sen. Bob Hertzberg, D-Van Nuys, issued a call today to the Los Angeles County Metropolitan (Metro) Board to consider amending its expenditure plan for a proposed sales tax measure scheduled to be placed on the November ballot and include specific projects benefiting
CSUN.

The board is scheduled to vote on June 23rd on the plan and placing the tax measure on the ballot. If approved by voters, the sales tax increase would provide an estimated $120 billion over the next 50 years to fund transportation infrastructure improvements throughout the county.

“The Metro expenditure plan is the product of a lot of hard work and thoughtfulness, but it has one glaring omission: CSUN,” Hertzberg said. “As the state’s largest Cal State campus with nearly 50,000 students, workers and faculty, CSUN draws commuters from throughout Los Angeles County, and it desperately needs public transportation options.”

The Metro plan includes some money that could be accessed for projects around CSUN, but it fails to tie any money to specific projects. That lack of a guarantee means the money could easily go elsewhere.

“A lot of work has gone into Metro’s plan, with a great deal of consideration given to San Fernando Valley projects, and we appreciate that,” said Yaroslavsky and Katz in a joint statement. “The northern part of the
Valley – and CSUN in particular, being the Valley’s largest public employer – needs public transportation solutions. It’s not too late for Metro to make adjustments to its plan to meet those needs.”

CSUN President Dianne Harrison has talked and written frequently about the importance of transportation to the university’s students.

“Quality mass transit for many of our students, who come from throughout the region, is not mere convenience,” Harrison said. “It is an essential link to earning a college degree, improving the fates of their families and powering the organizations and businesses that lift Los Angeles.”

Two transportation summits held by Hertzberg brought attention to CSUN’s transportation woes, with students telling stories about spending hours on multiple bus lines just to get to campus and having to make separate arrangements to get home because bus service often stops before evening classes finish. Furthermore, surface streets are clogged, with 200,000 single-occupancy car trips made to campus each week, and parking around campus is almost impossible to find.

CSUN is a countywide campus and it offers opportunity for upward mobility. Each year, there are more degrees earned by under-represented minorities at CSUN than any other university in California. In addition, CSUN graduates more teachers every year than the entire UC system combined, and there are 19,900 Pell Grant recipients at CSUN, the second most recipients in the entire nation.

“A comprehensive transportation plan for the county is important for our future, and I would like to support Metro’s plan, but I may not be able to if CSUN is ignored,” Hertzberg said. “It’s easy to fix this – by using funds already within the plan and attaching them to a specific project benefiting CSUN. A few simple changes can provide CSUN the guarantees it deserves without undercutting any of the plan’s other priorities or projects.”

Hertzberg took out a full page ad in the Los Angeles Daily News on Wednesday advocating for CSUN transportation improvements and encouraging San Fernando Valley residents to provide their input to the Metro board. A copy of the ad is attached.

Q: What is the Traffic Improvement Plan?
A: Metro’s plan for spending the $120 billion in estimated revenues over the next 50 years from a sales tax measure that is scheduled to appear on the county’s November ballot. It includes a long list of infrastructure projects, from addressing the Sepulveda Pass to increasing connectivity to LAX, and will essentially govern major transportation improvements over the next five decades.

Q: Is the plan final?
A: No. While Metro has circulated a final draft of the expenditure plan, it has not voted on it. The plan will become final if the Metro board approves it. A board vote is scheduled for June 23rd. In addition, county voters would have to approve the sales tax by a two-thirds majority in November.

Q: Some say Metro’s plan includes funding for CSUN improvements. Does it?
A: The plan has other projects designated for the San Fernando Valley, but they are not connected to CSUN. Metro’s plan has two line items that could be accessed for CSUN projects in the future: $50 million for regional bus rapid transit (BRT) projects, and $107 million that won’t become available until 2048. As the plan is written, however, there is no guarantee that a single dime from those pots of money will be used for projects benefiting CSUN. Metro’s plan is full of commitments to projects throughout the county, with specific timelines, but does not contain a single commitment to CSUN.

Q: Metro’s plan has been circulating for 90 days. Why raise the issue now?
A: The issue has been raised continuously for nine months. A transportation summit was held on CSUN campus on March 3. A broad coalition of San Fernando Valley leaders sent Metro a letter on April 21 requesting several changes to the plan, including funding for a BRT line connected to CSUN campus and guarantees the Valley would get its fair share of funding. Metro officials appeared open to the changes, but Metro’s latest draft plan, released on Friday, does not provide funding for the BRT line or any other CSUN project.

Q: Have other changes been made to Metro’s plan since it has circulated its draft?
A: Yes. In the Valley, the Orange Line has seen its scheduled improvements accelerated by five years on the start date and three years on the completion date. Throughout the county, more than a dozen projects have been accelerated a combined 42 years. Furthermore, three additional projects have been added at the end of the timeline of the plan.

Q: Metro officials say the sales tax can’t fund everything – every need can’t be in the plan. Why should CSUN be a priority?
A: CSUN is the largest Cal State University in the state, and it draws commuters from throughout Los Angeles County. As it is, CSUN has few public transportation options. Yet, it has nearly 50,000 students, faculty and workers and 320,000 alumni spread across the county. 17,000 (46 percent) of CSUN’s undergraduate students are Hispanic, compared with 5,600 at UCLA, which has the most of any UC school. CSUN has more Hispanic students than any other university in California, and each year more degrees earned by under-represented minorities at
CSUN than any other university in California. The university is a magnet for Los Angeles County’s upwardly mobile, so it makes little sense to have limited public transportation serving it.

After serving in the Assembly from 1996-2002, including two years as Speaker, Hertzberg invested in solar, wind and electric-car projects; and worked for structural changes in government through the Think Long Committee of California. Learn more at www.senate.ca.gov/hertzberg.